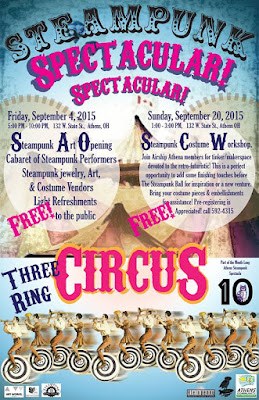 For the second year ARTS/West will be hosting the opening event for the month long 3 ring circus of the Athens Steampunk Spectacle.  The event will include dance performances by both the Steampunk Ballet and the Whiplash Tribal Fusion Dancers, plus a singing performance by Devin Sudman, a senior vocal major at OU.  Performances begin at 7 pm.

The event will be rounded out by the presence of Athens own Steampunk group, Airship Athena, who will be running the costume workshop on September 20th at ARTS/West.

Light refreshments.  Free event.
Posted by Arts West:Athens' Community Gateway to the Arts at 8/28/2015 No comments:

2016 Athens Poet Laureate
The City of Athens and the Athens Municipal Arts Commission (AMAC) is seeking its inaugural
Poet Laureate. AMAC encourages project submissions from candidates that embrace poetry
and explore its place in the community. This honorary 1-year position commences January 1, 2016.

The Poet Laureate is an advocate for the arts and fosters a love of poetry and literature
among the diversity of all residents. 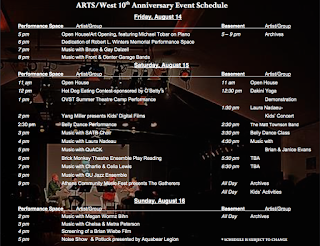 Come check out our schedule of events for our 10th Anniversary! We hope to see you there for a weekend of celebrations!
Posted by Arts West:Athens' Community Gateway to the Arts at 8/12/2015 No comments:

Come celebrate with us!

ARTS/West is in it's 10th year and we want to celebrate with you! 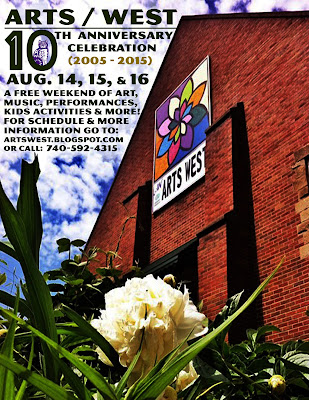 Posted by Arts West:Athens' Community Gateway to the Arts at 8/03/2015 No comments: