Front & Center starts up this Saturday! 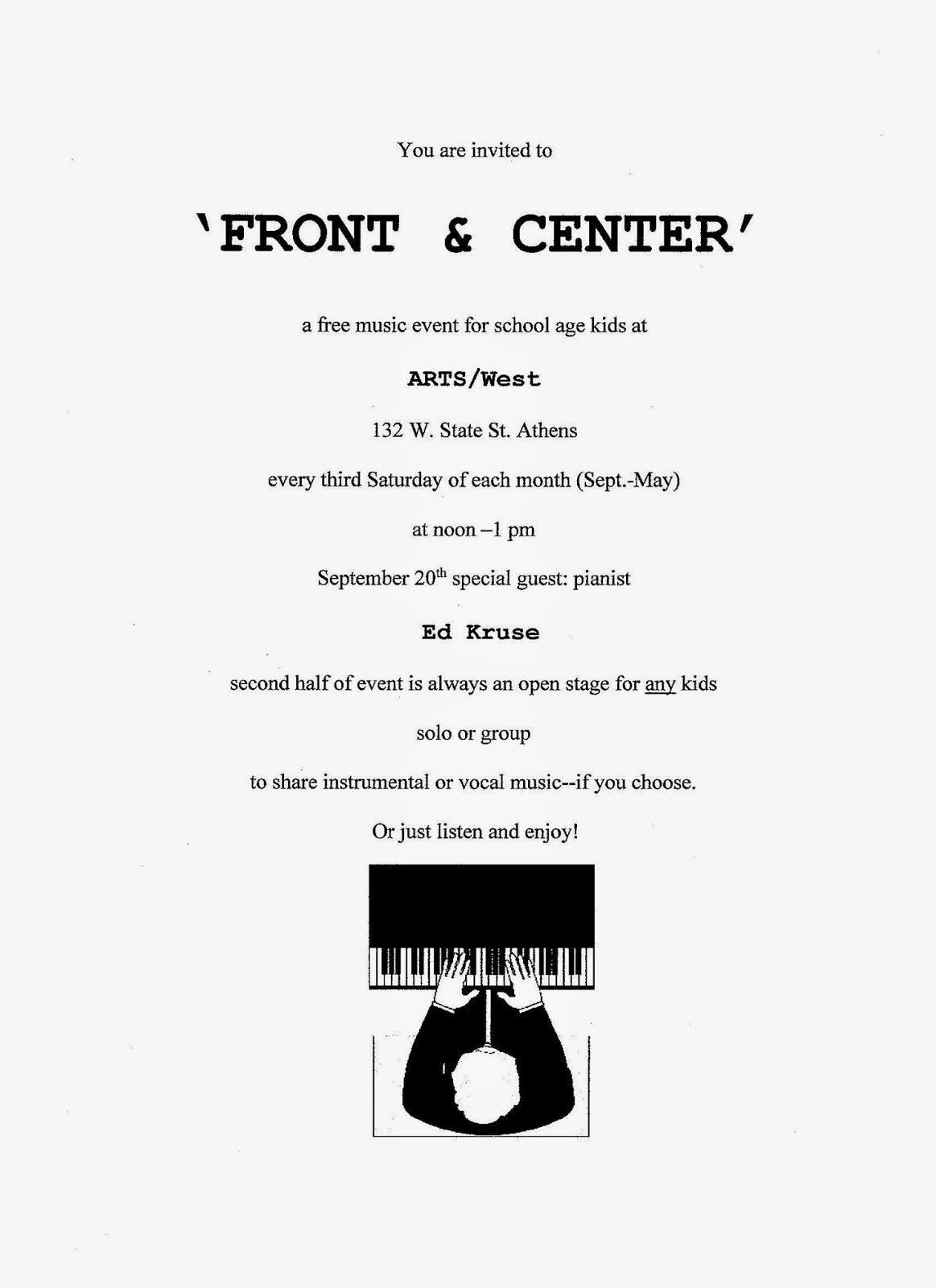 Check out this article to see what is planned for the year!


Posted by Arts West:Athens' Community Gateway to the Arts at 9/18/2014 No comments:

You know you want to work with some awesome people!

The City of Athens is seeking qualified applicants for the position of Events Coordinator for ARTS/West. This a part-time position at the ARTS/West facility. Must be knowledgeable in theater practices, including sound and lighting technology. Experience with community customer service a plus. Must be available weeknights and weekends. ARTS/West is part of the City of Athens, Arts, Parks and Recreation Department. The starting hourly pay rate is $10.30. General inquiries may be sent to the Human Resource Director via email: HumanResources@ci.athens.oh.us.

Interested applicants may obtain an application at the Mayor’s Office, City Building, 8 E. Washington St., Monday – Friday, 8:00 am to 4:00 pm, the ARTS/West facility, 132 W. State St., Monday – Thursday, or on the City of Athens website at http://www.ci.athens.oh.us/jobs.aspx. A resume indicating experience and qualifications must be included with this application and submitted for preliminary consideration to the Human Resource Director, City Building, 8 E. Washington St. by 4:00 p.m., Wednesday, October 1, 2014. Women and Minorities are encouraged to apply. 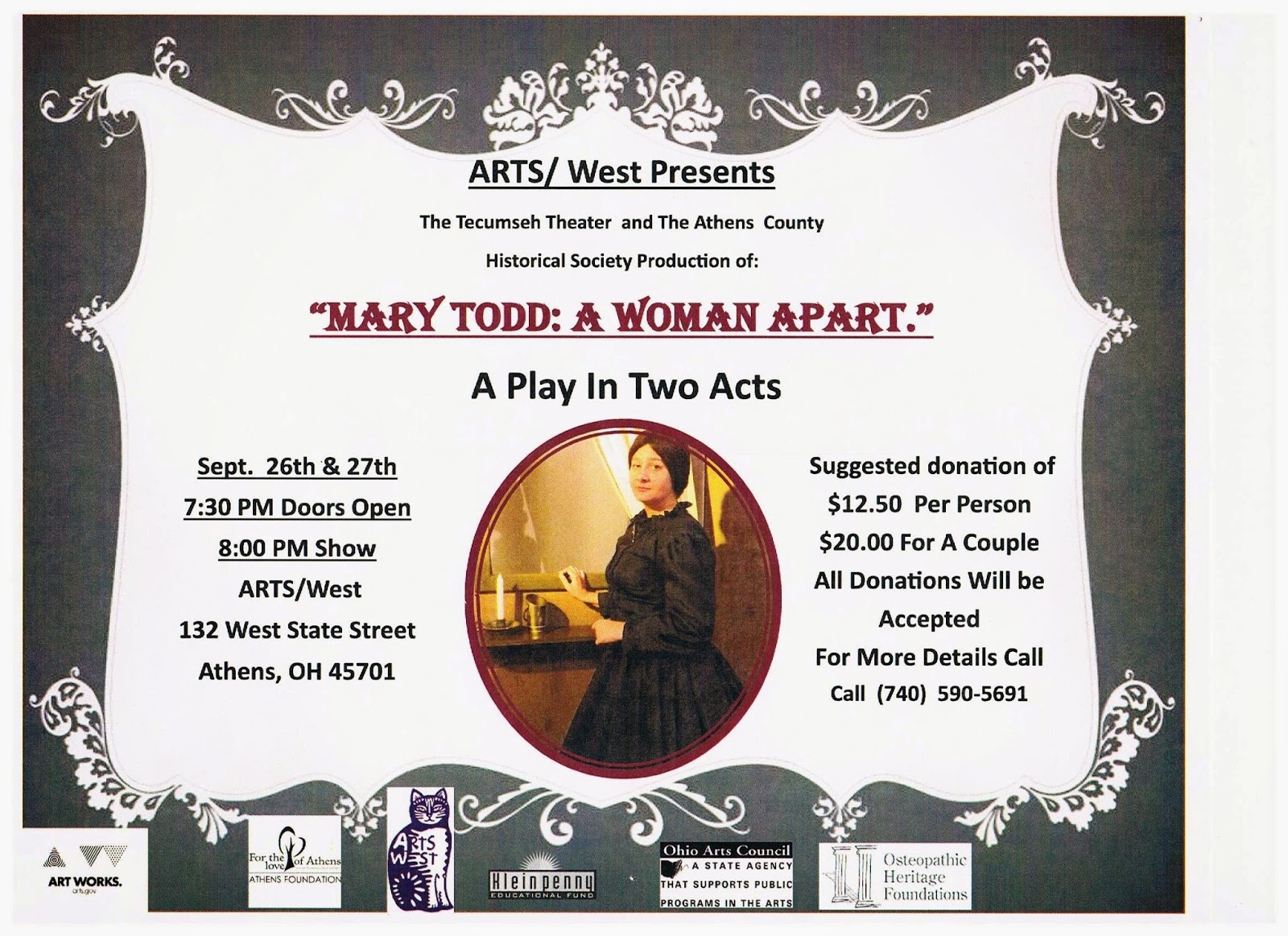 ARTS/West Presents: The Tecumseh Theater and The Athens County Historical Society Production of:

Mary Todd: A Woman Apart is a historical fictionalization of Mary Todd’s final day in Bellevue Place in Batavia, Illinois and recounts her life through ghost and memory. It is her final attempt to set the record straight with everyone on who she really is. The purpose of this show is to educate people about a historical figure who had been persecuted by an unforgiving and ruthless press.

This play was written by Carl Wallnau. It was originally produced at the Centenary Stage Company in New Jersey, and subsequently went on to New York.

Suggested donation of $12.50 per person, all donations accepted.
Posted by Arts West:Athens' Community Gateway to the Arts at 9/10/2014 No comments:

Check out this WOUB video from Friday's Steampunk Spectacle!

Interviews and performances from day one of the 2014 Steampunk Spectacle, held Sept. 5 at ARTS/West in Athens, Ohio. Produced by Nicole Schneider of WOUB Public Media.

Posted by Arts West:Athens' Community Gateway to the Arts at 9/09/2014 No comments:

ARTS/West Presents: A Ritual to Read Together: A night of poetry, music & storytelling 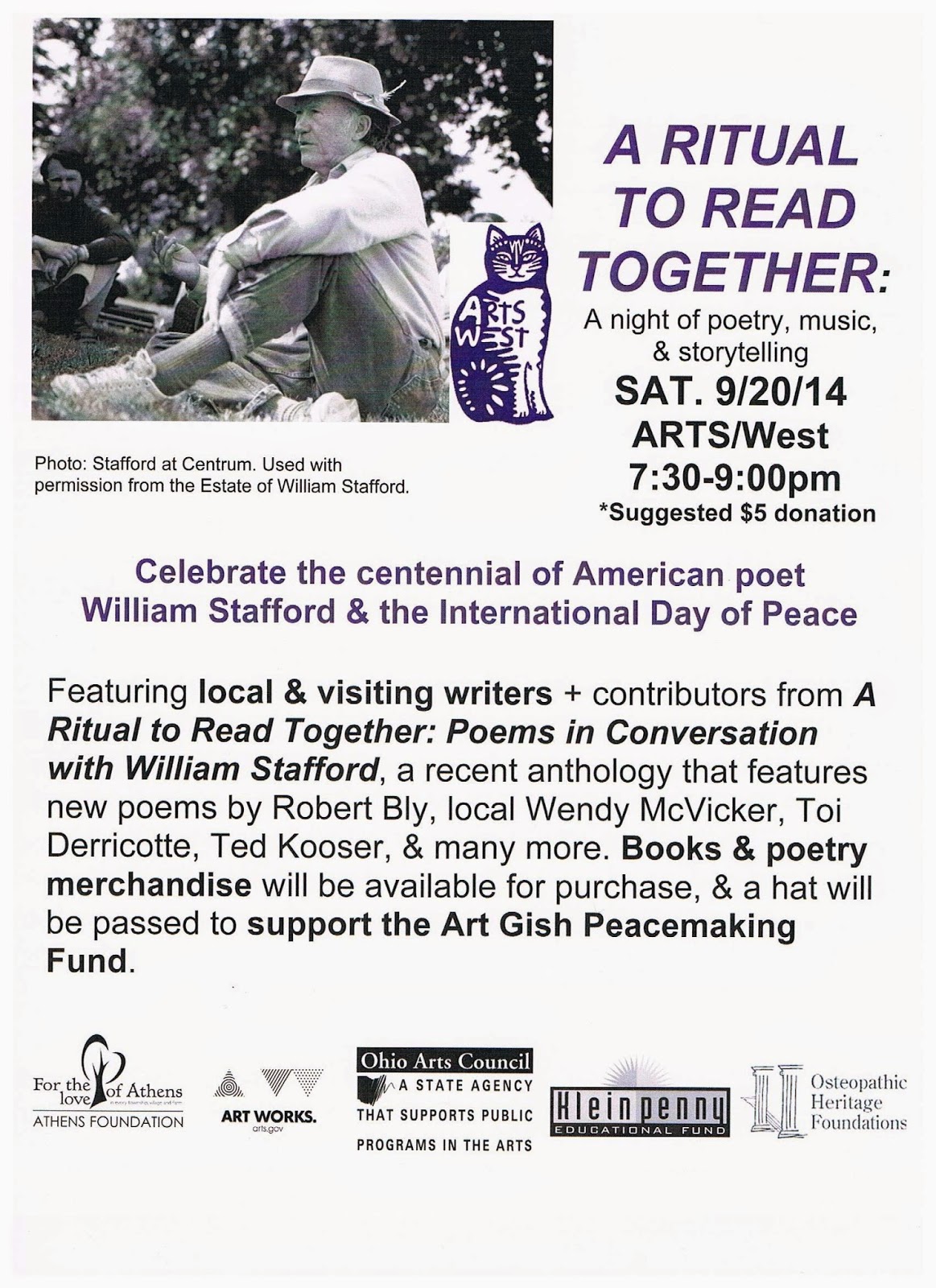 Posted by Arts West:Athens' Community Gateway to the Arts at 9/08/2014 No comments: