Women on the Line

Posted by Arts West:Athens' Community Gateway to the Arts at 3/27/2013 No comments:

Everyone's favorite clothing exchange extravaganza is back at Arts/West!

Join us April 5th-7th in the basement for a good time and "new to you" clothing.  All proceeds benefit Arts/West and leftover clothes will be donated to local charities.

How does Cats Pajamas work?
-Bring clothes you no longer want, to the exchange. The amount of items you can take equals what you brought. (Each additional item $1) -Pay $5 entry. (You only pay entry once for the whole weekend!) -Bring your clothes to Arts West prior to the event, and you will get a GOLDEN TICKET to take as much as you like the whole weekend. 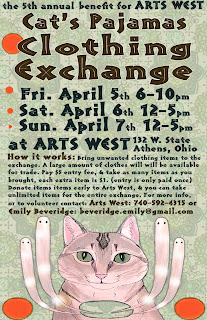 "We believe that all women are capable, courageous, creative and inspired."


Join Arts/West and Women of Appalachia on March 15th, 2013 at 6pm for the
5th Annual Women Speak Event.
Performances of story, poetry and song come together to showcase the diverse backgrounds, ages and experiences of Appalachian women.

There will be a reception immediately following the performance.

Also be sure to check out the Their Stories and Their Art Exhibition
September 2 through December 10, 2013!

For more information on Women of Appalachia, visit http://womenofappalachiaevents.com/ 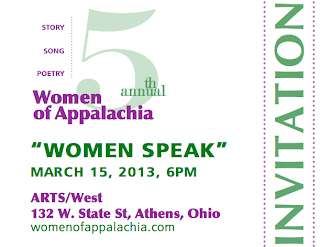 Posted by Arts West:Athens' Community Gateway to the Arts at 3/15/2013 No comments:

Come check out What the Fool?!?, an original silent comedy written and performed by Drew “The Dramatic Fool” Richardson, this Sunday, March 17!

An Ohio University alum who also studied in Paris, Drew is an actor, clown, and sometimes-instructor who specializes in devising solo acts for showcase at theaters and festivals around the country. Inspired by the circus, vaudeville, and silent film traditions, he has crafted no fewer than five of these plays, including The Psychology of Clumsiness and the acclaimed Help! Help! I Know This Title is Long, But Somebody’s Trying to Kill Me! He has also served as Artist-in-Residence for the Chicago Park District, created a series of short silent films now showing in major theaters across the U.S., and currently teaches theater workshops to both kids and adults.

What the Fool?!? is Drew’s most recent invention. A tale about a bumbling office worker who attends a theater and finds himself the star of the show, the play explores the creative potential of foolish actions and has been met with laughter and rave reviews from the Quest Visual Theatre, among others. And because every performance is redesigned to fit the space in which it takes place, each is sure to be one of a kind.

For more information about Drew Richardson go to www.dramaticfool.com. Otherwise, look out for his “How to Think Like a Fool” video series on YouTube, and enjoy this excerpt from Help! Help! below.

Posted by Arts West:Athens' Community Gateway to the Arts at 3/13/2013 No comments:

Drew Richardson performs a solo act about a guy who goes to a show and instead ends up being the show!
Comedy, magic, circus and silent film come together to create this entertaining theatrical event.

The show is March 17th, 7pm at Arts/west.
Reservations are recommended. Please e-mail drewfool.artswest@gmail.com with your name and number of people in your party.
$10 donation is greatly appreciated from all non-students attending. Event is free for OU students! 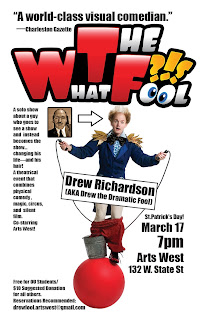 Posted by Arts West:Athens' Community Gateway to the Arts at 3/11/2013 No comments: