We don't know what you've got planned for next weekend but we know you'll include ARTS/West because we will be packing a wallop!

Friday May 4 is not just the opening of the Cat's Pajama's Clothing Exchange we will also be welcoming:
Below and Beyond a new play about urban camouflage, immortal jellyfish, natural gas extraction and an underground creek turned sewer.
Created by Beth Nixon and Sarah Lowry
(of Ramshackle Enterprises and The Missoula Oblongata)
With accordion music by Matthew Schreiber. Directed by Donna Sellinger.

Inspired by the long-submerged Mill Creek of West Philadelphia, as well as current debate about fracking in Pennsylvania, this original play explores the complications of what lies beneath our feet. Using puppets, pulleys, movement, maps, and the imagination, the performance examines the intricacies of extraction and recognizes a waterway that continues to resurface. Tree house, houseboat and bunker dwellers unite amidst an invasion of urban water buffalo. All this, plus a one-man band!

Show lasts approximately an hour and a half and is geared toward adult audiences and kids ages 10 and up.

AND! Fourth Annual Cat's Pajamas Clothing Exchange Benefit will open May 4 from 6-10pm. This will be the first chance to participate and get your paws on all the early donations of clothes! Free PIZZA will be available.
Regular hours of exchange are 12-5pm on Saturday May 5th and Sunday May 6th.

The Cat's Pajamas Clothing Exchange is a three-day fundraising event for ARTS/West, our community performing arts center located at 132 West State Street, in Athens, Ohio. This year will be the fourth installment of the exchange, that grows in attendance and donations each year it has occurred. The entire basement of ARTS/West was filled with clothing items last year, and many bags of clothes that remained after the event were donated to local charitable organizations.

The premise of the exchange is simple:
We will be accepting early donations until Thursday, May 3 at 4:00. Anyone who brings donations early to ARTS/West will receive a golden ticket that allows them to take as many items as they like. Because the exchange will occur during Ohio University's Mom's Weekend, as it did last year, we expect a good turnout of Moms at this family friendly event.

Since 2005, ARTS/West has become one of the premiere art venue in Athens. Hosting events such concerts, plays, after school, classes, and art exhibits, ARTS/West truly is an asset to the community. The Cat's Pajamas Clothing Exchange is merely one of many annual events that makes ARTS/West shine.

The Other House, Final Cut, will be shown at ARTS/West on Friday, April 27, at 7:00.    Admission price: $4 suggested donation  The Other House is taken from the book of the same name, a work of historical fiction by Rebecca Hooper Eastman (1877-1937), a popular writer of her time, and daughter of a major developer of the Brooklyn Museum, Franklin W. Hooper (1851-1914).  The movie was shot in Athens County and features all local actors, including talented children and people you may know.  Directed and photographed by the gifted Steve Fetsch, ably assisted by Isaac Smith.  Don't miss this one!
Posted by ekprince at 4/26/2012


The Sweetback Sisters (who roll into Athens TOMORROW evening) are generating news both near and far.  Just last month the singing duo and performing sextet was featured on NPR’s Mountain Stage for a six-song set.  The set includes the song “Thank You” which the group preformed last year at France’s Festival de Craponne. 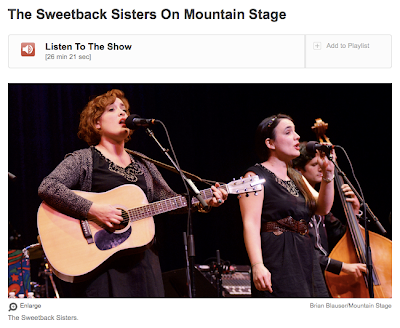 The sisters can also be seen on WOUB’s music blog that outlines their Stuart’s Opera House performance last summer and serves as a preview for tomorrow’s show. 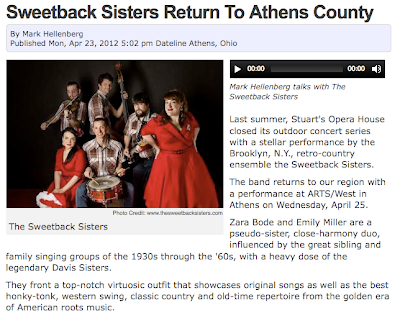 Come see The Sweetback Sisters tomorrow evening at ARTS/West.  Bring your friends, family and honky-tonk lovers.  Doors open at 7:15pm and show starts at 8pm!
Posted by KateSierz at 4/24/2012

The reading will be followed by a wine and cheese reception.

$10 donation or material donation (see www.mspathens.org for suggestions)
Posted by ekprince at 4/20/2012 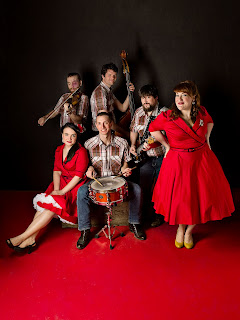 "The Sweetback Sisters and their crack band have created a CD that, while remaining very true to the roots of early country, bristles with the energy of the very best young American performers." -Sing Out!

Get your Sweetback Sisters advance tickets before they are no longer advanced. Time is running out to purchase tickets for the April 25th show featuring the spirited rockabilly harmonies of Emily Miller and Zara Bode.

With influences ranging from The Judds to Wanda Jackson, this sextet is able to mix tones of remorse and heartbreak with swinging honky tonk to relay a modern 50’s sound.

Just back from performing at SXSW in March, the Sweetback Sisters are continuing to grow in popularity and fan base. Don’t miss your chance to see them at your local arts venue instead of shelling out piles of cash at one of their numerous summer festival performances.

ARTS/West doors open at 7:15pm and the show starts at 8:00pm. Advanced tickets for members are only $5, non-members pay $15, students pay $8 (with valid student ID at door) and last minute arrivals pay $18 at the door.

Sample some music from The Sweetback Sisters' album Looking for a Fight here .

Boring week ahead? Not anymore! Come see The Sweetback Sisters Wednesday, April 25, 2012 at ARTS/West.
"Americana darlings [with a] roadhouse edge." - NPR "With Looking For A Fight, the Sweetback Sisters could turn out to be the decade’s Bring It Girls. Showing true grit and wit, they are a genuine blast from the past — no matter how far back you want to go." - The Huffington Post
Doors open at 7:15pm, the show starts at 8:00pm.Tickets in advance are $5 for ARTS/West members, $8 for students (only available in advance, valid ID required at the door to claim tickets at advance student price) and $15 for non-members.Tickets at the door are $18.Call the ARTS/West office at (740) 592-4315http://www.thesweetbacksisters.com/
Posted by ekprince at 4/16/2012 No comments:

Please note: Improv for Teens has been canceled due to low enrollment. If you registered you will have already received and email.
Posted by ekprince at 4/13/2012 No comments:

Here’s another video of The Sweetback Sisters performing a song off their new album, Looking for a Fight: Love Me Honey Do Don’t miss your one chance to see The Sweetback Sisters in Athens! They will be appearing live at ARTS/West on Wednesday, April 25!Doors open at 7:15pm, the show starts at 8:00pm.Tickets in advance are $5 for members and $15 for non-members.Tickets at the door are $18.Call the ARTS/West office at (740) 592-4315

"With Looking For A Fight, the Sweetback Sisters could turn out to be the decade’s Bring It Girls. Showing true grit and wit, they are a genuine blast from the past — no matter how far back you want to go."--Michael Bialas, The Huffington Post, June 2011http://www.thesweetbacksisters.com/
Posted by ekprince at 4/11/2012 No comments:

A Trio of Poets on Thursday, April 12-7:30pm- Reading & reception at ARTS/West with poets Carrie Oeding, Kent Shaw, & Becca J.R. Lachman, who will all read from their first collections.

Also, the space will feature a gorgeous banner exhibit "Another Language Altogether," which visually sings the poetry of Wendy McVicker (and was designed by artist Molly Schoenhoff's talented students).

Thanks to a grant from The Puffin Foundation of Teaneck, NJ, the Athens Dance Collective and ARTS/West present the Progressive Performance Project! The culmination of dozens of hours of work in the studio, these dances, choreographed and performed by Collective members, are dances for a moratorium on fracking, dances for the 99%, dances for a world that squashes greed, dances to OCCUPY the stage, dances that take heed of the state of our environment, dances to change minds, dances with an eye on the future, dances to raise consciousness, dances of ONENESS.

This is a FREE performance, but $5-10 donation is recommended. Donations will be split between Athens Dance Collective and ARTS/West.

Come out and see some art!

If you are an Ohio University student interested in supporting the local arts community, apply for a work study position at ARTS/West! The position would include both administrative and event duties to create a well rounded work experience. Work-study responsibilities include creating Facebook events to promote ARTS/West events, distributing promotional posters, updating various ARTS/West databases, and assisting with events.

If you qualify for a work-study position and are interested in joining the ARTS/West team this spring, apply with Ohio University Online Services. For more information on Ohio University’s work-study qualifications, click here .

Reports to: Program Specialist or Events Coordinator, depending on the project

Don’t miss The Sweetback Sisters playing live in concert for one night only at ARTS/West two weeks from today, April 25!Here is a video of them performing the song “Be Back Home Tonight”Doors open at 7:15pm, the show starts at 8:00pm. Tickets in advance are $5 for members and $15 for non-members.Tickets at the door are $18.Call the ARTS/West office at (740) 592-4315“If you think the concepts of hipster Brooklynites and classic country music are mutually exclusive, allow us to introduce you to this swinging sextet. Fronted by the closely harmonizing duo of Zara Bode and Emily Miller, the zingy group is simultaneously reverent of tradition and contemporaneously cheeky.” - The Boston Globe, Feburary 4, 2010www.thesweetbacksisters.com
Posted by ekprince at 4/04/2012 No comments: