The Environmental Theater Brigade along with ARTS/West and the Sierra Student Coalition are proud to announce their partnership in the creation of a year-end, environmental education event this Tuesday, May 31st at 7 p.m.

The event will feature this year’s final performance by the Environmental Theater Brigade, a student-run organization that focuses on creative environmental education through the form of skits. There will also be a discussion panel about environmental and human rights issues, thanks to members of the local Sierra Club.

ARTS/West will be hosting the event at their location on 132 W. State Street in Athens, Ohio. The event is open to all members of the Athens community and $2 donations will be accepted at the door, with all the proceeds going to ARTS/West.

For more information about the event, contact Sierra Nagay at Sierranagay22 at gmail dot com, or check out the Environmental Theater Brigade’s webpage on Facebook HERE.
Posted by ekprince at 5/31/2011 No comments:

All this weekend at ARTS/West!

Tickets $5 and available at the door

**Free shuttle to ARTS/West at 7:15 on each show night! Catch it outside the 4th floor of Baker University Center!

LFC's performance of Jonathan Larson's breathtaking rock opera will take you to Bohemian Alphabet City and allow you to witness 20 somethings struggle with love, artistic expression, drugs, the Man, and figuring out how to live with AIDS. Come laugh, cry, and celebrate the death of Bohemia with this incredible cast. You'll have FOUR CHANCES TO SEE IT and why not beat the crowd and come for the first weekend? Or come to all 4 shows! Just don't miss out!


Saturday, May 28: SMORGASBORD 2011:::Community Action through Arts, Education and more! This year Smorg wants to give back to the wonderful community of Athens OHIO by providing entertainment and education. All proceeds of admissions will go to CFI (community food initiatives) and ARTS/West.

A NIGHT OF 100% NATURAL IMPROVISED MUSIC WITH 100% ORGANIC IMPROVISED DANCE! It does a body good.

POTENTIAL ATTENDEES! Bring a kazoo, a tambourine, and/or just your open mind. There will be optional audience participation. Join us in intermittent song and/or dance (or not). Find out more at their Facebook event page HERE 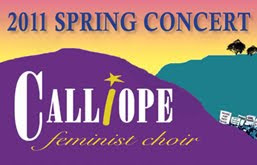 Calliope, a community-based women's choir, performs a full concert each year as well as singing in events in support of community organizations. Dues are based on ability to pay, and childcare is provided for singers. We rehearse Mondays, September through May, and welcome new members each September. Calliope is directed by Nancy Pierce and accompanied by Lynn Sullivan.
Posted by ekprince at 5/20/2011 No comments:

Each group is has their own registration policies and information. I've posted as much as I can below to help you sign up!

Applications available on the website: APPLICATIONS Forms should be mailed to or dropped off at ARTS/West between 10am-4pm M-F.

For information on Athens Rock Camp for Girls contact Tessa Evanosky at 740.594.5440

Participants will have the opportunity to explore a variety of different writing genres and collaborate with professional authors from the local Athens area! Each student will additionally finish the week with one fully polished writing piece of their choice, which will be presented to family and friends during a Friday evening celebration. This is a great way for students to grow as young writers and to develop their composition skills through the summer!

Join us for a great week of fun and games as we explore the art of creative writing!

Participants in the camp will have an opportunity to gain experience in theatrical and/or technical production. Our Camp is open to students of grades Entering 2nd grade – 12th grades.

A free demonstration performance for family and friends of Amy’s Attic is Friday July 8th at 11am. Workshop fees are reduced 10% for every sibling enrolled. Online registration is available at www.ovst.org or download the registration materials and mail your check to OVST, PO Box 303, Athens, Ohio 45701.

In the Presence of an Absence- Canceled

In the presence of Absence which was scheduled for this week has been canceled. The show will be rescheduled and we will keep you updated.

We do invite you to join us on Saturday, May 14th for FRONT & CENTER a free music event for school age kids.

Front and Center May 14, 2011 from noon-1:00 featuring the Composition Showcase! Students are invited to play compositions of their own. Second half of event is always an open stage for any kids, solo or group, to share instrumental or vocal music--if you choose. Or just listen and enjoy.

In the Presence of an Absence

In the Presence of an Absence is a nonlinear performance project by Sarah Stevens, consisting of short performance pieces. The project confronts the discontenting deconstruction of identity politics and the absences created by performing only certain aspects of one's identity. Inspired by the tiles of a mosaic, In the Presence of an Absence is a examination of post feminist rhetoric with both humor and sadness. This project is a part of the ARTS/West Presents Series and will be free, donations will be gladly accepted.
Posted by ekprince at 5/09/2011 No comments:

You all make ARTS/West great

Big thank you to Emily Beveridge, the volunteers, ARTS/West team, and everyone who came out to support the Cat's Pajamas clothing exchange. We made a little money, made some new friends but most of all hope you all got what you needed and more! Don't forget to post pictures of yourself in you sweet new dudes and tag ARTS/West!

Coming up: This Sunday, May 8 at 7pm Dane McCarthy presents a screening of his film The Watching. Check out the story in the Athens News HERE

In the Presence of an Absence is a nonlinear performance project by Sarah Stevens, consisting of short performance pieces. The project confronts the discontenting deconstruction of identity politics and the absences created by performing only certain aspects of one's identity. Inspired by the tiles of a mosaic, In the Presence of an Absence is a examination of post feminist rhetoric with both humor and sadness. This project is a part of the ARTS/West Presents Series and will be free, donations will be gladly accepted.

Check out the screenings of Dane McCarthy's films The Watching and One Way Mirror this coming Sunday, May 8, 2011, at 7pm! Here's what Dane has to say about his films:

"The Watching is my fourth locally shot feature film. My purpose is to educate through entertainment. To me, the two are the same, and the best entertainment is educating. Bottom line in life; we need to learn how to be better people. And in The Watching, the main characters' lives literally depend on it. So it's about young people who unexpectedly attract the attention of powerful supernatural forces bent on "educating" them-- or else! We as the audience get to watch how they adapt to this challenge, besides dealing with the ordinary problems of ordinary people-- life, love and how they are going to make it day to day.

My short film, One Way Mirror, is a pointed political statement about what could happen to an educated intellectual--a college professor-- who finds himself handcuffed to a chair and accused of murder in a fascist police state called America. And what happens to him is not pretty! This film was recently accepted for competition screening at the Athens International Film Festival."
Posted by Arts West:Athens' Community Gateway to the Arts at 5/03/2011 No comments: