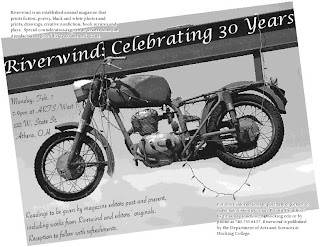 Riverwind magazine is pleased to celebrate the publication of its 30th edition by presenting a reading at ARTS/ West, Monday, February 7th, from 7- 9p.m. Editors will read fiction, essays, and poetry from past and present editions of Riverwind. This reading is open to the public; refreshments will follow. Riverwind is a publication of the Department of Arts and Sciences, Hocking College.
Posted by ekprince at 1/31/2011 No comments:

Who:
Anyone who has a spinning wheel or drop spindle that wants to join in the fiber fun. We will also have demonstrations and people willing to help if you want to learn. We will also be offering demonstrations in dyeing, needle felting, knitting and crochet help for those who wish to learn in some of the later sessions. B.Y.O.F. (bring your own fiber). FREE!


Sunday: Athens-based Ohio music and arts organization Aquabear Legion will be holding its annual Pancake Breakfast at ARTS/West (132 W. State Street in Athens) on Sunday, January 30th from 1pm-4pm. Aquabear is working with Snowville Creamery, Donkey Coffee, and Shagbark Mill so that people can support local music while eating local food! There will also be bacon upgrades available for a small donation. Money raised at the event will go to Aquabear Legion to help them continue their programming and work throughout the year and will help with the organization's initial non-profit filing costs. The event will also feature Tim Peacock and Matt McElroy spinning 78 rpm records all afternoon long. $5.00

Since 2004, Aquabear Legion has worked with over 150 bands from around the state of Ohio, along with dozens of artists and filmmakers. Aquabear Legion works to promote Ohio music and art through its website (www.aquabearlegion.com), releasing compilations (the 9th one due out this Spring), and by putting on shows and events like the 5th annual Aquabear County Fair which will be held March 3-6, 2011 in Athens.
Posted by ekprince at 1/25/2011 No comments: 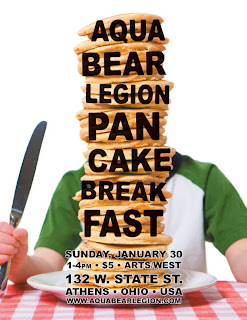 Come down to ARTS/West and enjoy ALL-YOU-CAN-EAT pancakes and more in the company of some awesome folks while helping to support Aquabear Legion on January 30, 2011 at 1:00pm! This is the main fundraiser for the Aquabear Legion every year and this year is particularly important as they are hoping to get a good start on their non-profit status and start-up filing fees and getting ready to release a new 2-cd Ohio music compilation (with over 30 bands) this March. Bring your friends and show the 'bear some love.

The Aquabear Legion is an Athens-based Ohio music and art collective. Since 2004, we have worked with over 150 Ohio bands presenting shows and events, putting out compilations, and promoting Ohio music through our website. We are currently finishing our paperwork to become a non-profit organization, preparing our 8th compilation, and setting up our 5th annual Aquabear County Fair (March 3-6 in Athens). Find out more at www.aquabearlegion.com and check out the facebook event page HERE Thanks!
Posted by ekprince at 1/20/2011 No comments:

The Missoula Oblongata is coming to ARTS/West


Deep in the hollows of the boarded up stadium, a barkeep sets his blender to pulse, a traveling salesman hawks his popcorn, and a bird with glorious plumage gores on or two people a year, on average. Meanwhile, an unusual young person makes plans to go underground. Because if your world extends only as far as the scoreboard and the nosebleed seats, who will ever understand your sense of humor?

Clamlump, the Missoula Oblongata's new touring production promises the awe of misunderstanding, the privacy of laughter, and a sky dark with feathers. The Missoula Oblongata presents Clamlump, the company's latest full-size touring play. This one is of course complete with an original score performed live by Travis Sehorn (pebble light) and all of the puppetry, animated junk, and densely layered language that they've become known for.

Second half of event is always an open stage for any kids, solo or group, to share instrumental or vocal music--if you choose. Or just listen and enjoy.

Following Front and Center the Corporation for the Performing Arts will be holding open call auditions for NOT WITHOUT OUR WOMAN from 2-4. To schedule an audition or for more information please email artswestathens at gmail dot com. 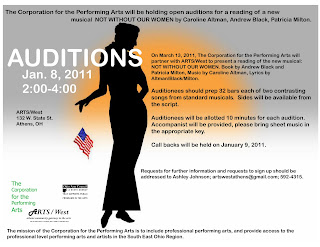 The Corporation for the Performing Arts will be holding open auditions for a reading of a new musical NOT WITHOUT OUR WOMEN by Caroline Altman, Andrew Black, Patricia Milton.

The Corporation for the Performing Arts in partnership with ARTS/West, 132 W. State St., Athens, OH will hold open auditions for a reading of a new musical: NOT WITHOUT OUR WOMEN on January 8, 2010 from 2:00-4:00pm.

On March 13, 2011, The Corporation for the Performing Arts will partner with ARTS/West to present a reading of the new musical: NOT WITHOUT OUR WOMEN. Book by Andrew Black and Patricia Milton, Music by Caroline Altman, Lyrics by Altman/Black/Milton. Auditions for the reading will be held at ARTS/West, January 8, 2011.

In the mid 1800s, the radical idea that women might vote, hold public office, or own property was unthinkable. This new musical, based upon real people and events, explores what happened when the instituted woman suffrage, attracting independent women to the wild frontier. The inevitable collision of old expectations and beliefs with the irresistible forward movement of human progress affects a whole community, the territory, and eventually, the nation. Whatever the century, the path to equality is fraught with obstacles. . .and blessed with pioneers.

Auditionees should prep 32 bars each of two contrasting songs from standard musicals. Sides will be available from the script. Auditionees will be allotted 10 minutes for each audition. Accompanist will be provided, please bring sheet music in the appropriate key. Call backs will be held on January 9, 2011.

Requests for further information and requests to sign up should be addressed to Ashley Johnson; artswestathens at gmail dot com; 592-4315.