What do you think?

Please help us out- take this survey!
http://www.surveymonkey.com/s.aspx?sm=DN4HuUAPBrKa4bLP95tc1A_3d_3d
Thank you!
Posted by ekprince at 5/29/2009 No comments:

Not quite June but what the heck

Inspired by the original 1936 film of the same name, this raucous musical comedy takes a tongue-in-cheek look at the hysteria caused when clean-cut kids fall prey to marijuana, leading them on a hysterical downward spiral filled with evil jazz music, sex and violence. You won't be able to resist the spoofy fun of REEFER MADNESS. The addictive and clever musical numbers range from big Broadway-style showstoppers to swing tunes like "Down at the Ol' Five and Dime" and the Vegas-style "Listen to Jesus, Jimmy," featuring J.C. Himself leading a chorus of showgirl angels. This dynamic show will go straight to your head! REEFER MADNESS is a highly stylized and satirical political commentary. It contains adult humor, religious parody, and drug use, as well as suggested violence and sexual explicitness.

Strike, Aquabears, Summer is a comin'

The Corporation for the Performing Arts presents a workshop production of the innovative, new musical satire, Strike!: Tuesday, May 19 and Wednesday, May 20 at 8:00PM.

The 2008 Producer’s Choice in the Humble Play Festival returns to ARTS/West at 132 W. State Street to come to life in its first workshop production with sponsorship support from the Athens County Convention and Visitors Bureau and the Ohio Arts Council.

An Appalachian family gets flipped onto their beer bellies when a father’s union goes on strike. Mother, Anne Marie has no choice but to find herself a job and leave her sports fanatic-husband at home to care for their teenage children. When faced with the threat of an eviction, father, Darrel puts all of his efforts towards winning the local Chili Competition!

Infused with an assortment of pop, rap, and country influenced musical numbers, Strike! is an entertaining and satirical look at the stereotypical Appalachian household.

Playwright and co-lyricist, Reyshan Parker has written seven full length plays, two of which he has produced at ARTS/West. He has a BFA in Playwriting and a Film minor from Ohio University. He wrote, directed, and produced the short mockumentary Casual Fine Dining in 2007. He is currently in pre-production for his next film, tentatively titled The Closet.

Strike! features a cast of actors who are no stranger to the Appalachian community, including: Rachel Weekley, Chad Kopenski, Devon Turchan, and Johnny Clift. OU alum Madeleine Burns will appear as Anne Marie, courtesy The Actor’s Equity Association. The workshop is co-directed by Emily Prince and Tamara Winters.

Call ARTS/West at (740) 592-4315 to get your advanced tickets, as seating is limited! Advanced tickets for adults are priced at $5, while tickets at the door are $8. Student tickets are $2. This show is not suitable for young children.

The Ohio Arts Council helped fund this program or organization with state tax dollars to encourage economic growth, educational excellence and cultural enrichment for all Ohioans.

Athens-based music and art collective Aquabear Legion continues its monthly concert series at ARTS/West on Thursday, May 21st at 8:00pm. This month Aquabear welcomes ' own Russenorsk, 's Brian Harnetty, and an improv performance by the Prince/Jacops Duo. Russenorsk will be performing their recently released and critically acclaimed album “Comforts” in its entirety and native and recent Bonnie 'Prince' Billy collaborator Harnetty will be making one of his first appearances.

Brian Harnetty is a musician and artist from , and his work involves overlooked elements of sound. many of his pieces transform found material––including field recordings, transcriptions, and historic recordings––into personal and often political sound worlds. His music and installations have been performed and shown in and . Previous works have included 75 years of recordings from the Berea College Sound Archive in , Harnetty using guitar, banjo, prepared piano, and dulcimer as accompaniment to the historic voices of the . His new album “Silent City” made with the collaborative help of Bonnie 'Prince' Billy, is a mix of songs, instrumentals, and field recordings that are loosely centered around a small, rural town. His previous work “American Winter” was given 4.5 out of 5 stars by Allmusic which called it "Brilliant, maddening, addictive”.

Athens' own Russenorsk will be playing their newest album “Comforts” in its entirety, the album was recorded at Athens' 3 Elliott Studio and has been receiving high praise from Columbus Alive and other media. Dan Prince and Todd Jacops will open the show with an improvisational duo set, both musicians play with the Athens group Dinner of Swords.

Aquabear Legion Live at ARTS/West with Russenorsk, Brian Harnetty, and Prince/Jacops Duo will take place Thursday, May 21st at 8:00pm. ARTS/West is located at 132 West State Street in Athens, Ohio. Admission is available at the door and is four dollars. For more information visit www.aquabearlegion.com.

Think your family is crazy? Come out to ARTS/West May 19 and 20 and experience the high notes and low blows of living with a family in Appalachia! 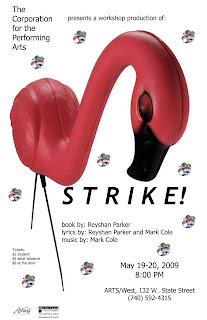 STRIKE! is a new musical satire by Reyshan Parker and Mark Cole that was awarded the Producer's Choice Award at the 2008 Humble Play Festival, and now The Corporation for the Performing Arts presents the workshop production! Featuring Madeleine Burns*.

An Appalachian family gets flipped onto their beer bellies when a father’s union goes on strike. Mother, Anne Marie has no choice but to find herself a job and leave her sports fanatic-husband at home to care for their teenage children. When faced with the threat of an eviction, father, Darrel puts all of his efforts towards winning the local Chili Competition! It's a story infused with pop, rap, and country music that is sure to put your "outrageous family reunion stories" to shame.

Call ARTS/West at (740) 592-4315 to get your advanced tickets, as seating is limited! Advanced tickets for adults are priced at $5, while tickets at the door are $8. Student tickets are $2. This show is not suitable for young children.