You can still get some tickets for Bergin Pines- world premiere of a new play by Tony DiMurro at O'Betty's, Haffas, or by calling the ARTS/West office at (740) 592-4315. For regular adults they are cheaper in advance. 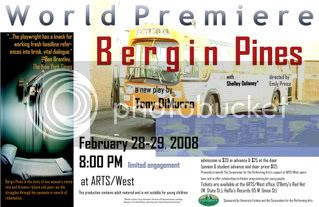 Here is the lineup and rough schedule:

*Remember ARTS/West is a NO ALCOHOL venue and the home of our new office... please be considerate of that. There are numerous bars down the street, and the aftershow takes place at a bar.

The Aquabear Reader: Ohio Music and Art Zine
The Aquabear Legion is proud to announce our new quarterly magazine The Aquabear Reader! It will be free and supported by advertising from local businesses... if you are interested in advertising your business and helping support local music and art PLEASE let us know! The first issue will be available at the County Fair on March 1st and features some pretty awesome stuff, make sure to get your copy. Also, if you are interested in helping us distribute please send us an e-mail at contact@aquabearlegion.com.

Photography and Art Submissions and Needed!
We are having a music photography show at the County Fair, it will take place downstairs throughout the show. We hope to have prints of music photography (preferably of Ohio bands, or venues in Ohio) up on the walls at the show and even some of it up for silent auction to help us raise more funds. We would love photography from amateurs, professionals and anyone in between please e-mail us at contact@aquabearlegion.com. CONTACT US ASAP!

New Live at ARTS/West Monthly Series! Starts April 4th!
The Aquabear is hosting a new monthly series at ARTS/West starting on Friday, February 4th at 7pm. Each show will feature two bands from Athens and elsewhere in Ohio! These shows will take place early in the evenings, so everyone can still go the shows at the bars at night! Bands will be announced soon!

Help the Aquabear Legion
If you are interested in donating or volunteering your time please contact us at contact@aquabearlegion.com. Submissions of any kind can be sent to the address below or e-mailed as well.

If your business is interested in advertising in the Aquabear Reader or being a distribution site you can let us know at contact@aquabearlegion.com

Based in Appalachian Ohio, The Aquabear Legion provides a community network for creative people. We are dedicated to supporting and enhancing independent music and art in our community and elsewhere. We focus on collaborative relationships to create opportunities for independent musicians and artists.

We are just about to go into tech for "Bergin Pines" this weekend so we are keeping pretty busy. What is Bergin Pines you say? Well here is a little blurb: The Corporation for the Performing Arts in partnership with University Estates presents the World Premiere of a new play by Tony DiMurro, Bergin Pines at ARTS/West. Bergin Pines features OU Faculty Shelley Delaney last seen in Betty’s Summer Vacation! Show times are February 28-29 at 8:00 PM, Tickets available at Haffa's Records, O'Betty's Red Hot or by calling (740) 592-4351. If you are not a student or senior tickets are cheeper in advance so go out and get them! This play has a VERY limited run. You don't want to miss the Athens Premiere, do you? Everybody who is anybody will be here. Bergin Pines contains adult themes and is not suitable for young children. The Corporation for the Performing Arts is a new non-profit venture thats purpose is to support the professional performing arts in our region and to support the operations of ARTS/West. Think of it as a "friends of."

Also- if you are interested in reading ARTS/West's 2007 Annual Report- well, here it is: Annualreport_07_ep1_ty.pdf
Free file hosting from File Den

Guests at “Oscar Night in Athens: Unscripted”
will enjoy a themed party-
like setting similar to the after-Oscars parties held in Hollywood –
but with the same fanfare, food and prizes of prior year’s events.
Hosted by the Friends of the Festival, the Feb. 24 event, beginning at 6 p.m. at the Athena Theater in uptown Athens with tickets for only $20 each,
benefits the Athens International Film + Video Festival (AIFVF).
The “Friends” will also donate a portion of proceeds to ARTS/West’s new Appalachian play festival.
Event co-chair Liz Pahl says this year’s event is actually more like three parties in one -- all to celebrate the event’s fifth year and the festival’s 35th year. “The Oscars broadcast will be shown on the theater’s screens -- and each theater will represent three decades of film history: a 1920s Gin Joint, a 1950s Rat Pack Cocktail Lounge, and a 1970s-era Studio 54 Disco Club,” Pahl said.
The other members of the “Friends,” co-chair Kelee Riesbeck and Colleen Carow, offer a special invitation to local film-lovers. “Come dressed to match a theater theme or as your favorite nominee – in or out of character – and get snapped by our local paparazzi on Athens’ own Red Carpet Walk,” Riesbeck said. “We’re counting on our guests to give Athens a Red Carpet to remember, all for a wonderfully unique cause,” Carow added. “If the guest’s star wins an Oscar, the guest will win an Oscar of his or her own – one made of fine chocolate,” she said.
The walk begins at 6 p.m. in front of the Athena. Once bedecked with a “swag” bag filled with products and discounts from Athens and Nelsonville businesses, every guest will enjoy heavy hors d'œuvres by local chefs and a full cash bar, as well as the chance to win a variety of door prizes, a silent auction original piece by Keith Chapman Jewelers, and the Oscar Ballot prize: a year of free Avalanche! and Della Zona pizza plus free Premiere Video rentals.
The “Friends’” decision to donate a portion of proceeds to local writers as part of ARTS/West’s Humble Play: Appalachian New Play Festival reflects the importance of supporting the artistic community where one lives, Pahl said.“We wanted to show the spirit of community when it comes to the arts,” Pahl explained. “We’ll be able to support those are celebrating Appalachian culture through the written word.”
Tickets, $20, each, are available at the Athena Theater and the Athena Grand box offices in Athens, and the Stuart’s Opera House box office or phone in Nelsonville at (740) 753-1924.
The AIFVF takes place in Athens and Nelsonville April 25-May 1, 2008.
Sponsors for this year’s Oscar Night in Athens-Unscripted are: Executive Producers: The Athens Messenger, Athena/Athena Grand Theaters, Time Warner Cable, Power 105 (WXTQ-FM/WATH-AM); Producers: Keith Chapman, Milo’s Whole World Gourmet; Directors: O’Betty’s Red Hot!!! Dogs & Sausages; Athens Underground, Follett’s Bookstore, Lamborn’s Studio & Custom Framing, Hyacinth Bean Florist, Kelee and Steve Riesbeck; Stars: Avalanche! Pizza, Della Zona Pizza, Premiere Video, Casa Nueva, Purple Chopstix, Salaam Café, The Oakroom, Ohio University Inn and Conference Center, Perk’s Coffee House & Roastary, Alexander Culadis, CPA, Carpet One Floor & Moore, Athens Area Chamber of Commerce, Donkey Coffee and Espresso, Ruby Tuesday Restaurant, Mountain Laurel Gifts, Lori Johanson/The Cheesecake Lady, Hocking Hills Travel, Athens Real Estate Company, Coors Light
For more information about the fundraising event, visit www.myspace.com/oscarnightinathens or email friendsofthefestival@gmail.com.
Posted by ekprince at 2/14/2008 No comments:

February 13, 2008- Play reading sponsored by "Tea Time,"
a group dedicated to just the consumption of tea.
After the reading join us for a tea party.
A short one act called
"The Absolutionist"
It is about..err..the idea of reaching an absolute,
which is incorporated in our psyche and our religions.
The reading starts at 7:15-7:30ish, followed by a tea party.
February 16, 2008- 'Front and Center' free music event for school age kids-
Noon until 1 pm
February 16th special guest: cellist Kevin Jacobson
Second half of event is always an open stage for any kids,
solo or group, to share instrumental or vocal music-- if you choose
Or to just listen and enjoy!
Posted by ekprince at 2/11/2008 No comments:

S.O.U.P.
(Students Organization for Undergraduate Playwrights)
Is having a reading entitled
"Hot Soup"
from 6:00pm-8:00pm
Friday Feb. 8th
Casey Clem, Rachel Dombi, Molly Hagan, Nathan Jeffers, Thomas Longworth, and Danielle Turmel will each have a short play (about 10 min) read.
Admittance is free as is the hot soup we will be serving at the event
Posted by ekprince at 2/06/2008 No comments: