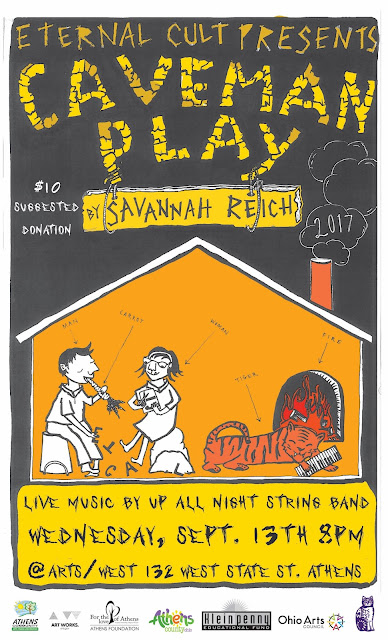 In Athens for one night only! At Arts West with the Up All Night String Band!ABOUT THE PLAY:Rocky and Dandelion are the first Cave-people to adopt agriculture. Douglas is the first domesticated animal. Together, they have prepared a presentation for you, the other Cave-people, to tell you all about the joys of agriculture. Agriculture is really great. You’re going to love it.A new play in which we are given an opportunity to go back to the moment when humanity had a choice. One path led us towards global warming, institutionalized racism, and snapchat filters. The other path led mostly to being eaten by tigers. Is it time to admit that we chose wrong?From the creators of “Toby Johnson Was My Best Friend in Junior High”, Eternal Cult presents:

A new play by Savannah Reich
With original music by Douglas Vento.

Developed with support from The Playwrights Center and The Glitterbox Theater.