SATB ChoirStrouds' Alliance Treasures Beauty
This Spring SATB: A Different Kind of Choir, is joining with the Friends of Stroud's Run for a benefit concert.
The concert will be on Friday, May 3rd at 7:30 pm, followed by a reception. SATB will be featuring music which celebrates the water that is so vital to our Lives.

After the SATB concert will be a reception to meet and greet ARTS/West's new Program Specialist, Chelsa Peterson! 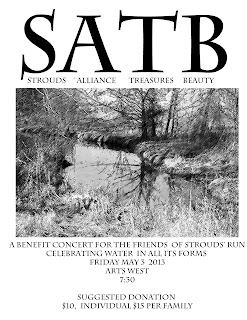 Posted by Arts West:Athens' Community Gateway to the Arts at 4/28/2013 No comments:

After spending ten years away from Athens, Ohio, Chelsa Peterson has returned to her hometown as the new Program Specialist at ARTS/West, which is a part of the City of Athens’ Arts, Parks and Recreation Department.

In the summer of 2007, after a memorable trip to China and Japan with her brother, mother and grandmother, Chelsa moved to Chicago, Illinois where she started her internship with the Lyric Opera of Chicago’s Ticket Department. Since then she has been a ticketing supervisor at the Ravinia Festival, an Operations Coordinator at the Steans Music Institute and a Program Coordinator for Midwest Young Artists where she coordinated auditions, summer programs, choral programs, Music & Movement, as well as private teaching. While in Chicago, Chelsa participated in the Evanston Sigma Alpha Iota Alumnae Chapter, the Chicago Symphony Orchestra’s Overture Council, and was a member of the DePaul Community Choir as well as With One Voice.

Keep it Simple, Keep on Singing! Calliope Feminist Choir and friends is having their 2013 Spring Concert this coming weekend. Performances will be taking place at Arts/West on Saturday, April 27th at 7:30 pm and Sunday, April 28th at 4:30 pm.

Special guest artists Mary Brandal, Lawrence Green and friends, along with Celia Lewis, will also be joining the ARTS/West stage. Light refreshments will be provided following each performance.

Tickets are available at Hyacinth Bean, Athens Book Center as well as from any Calliope member. 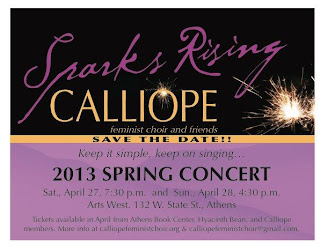 Posted by Arts West:Athens' Community Gateway to the Arts at 4/24/2013 No comments:

"The Escape of Jane" is a one-woman play performed by actress Patricia Thomas. The play is based on a story by Henry Burke and Dick Croy and has been adapted for the stage by the Appalachian Ohio Storytelling Project. Ms. Thomas' performance holds the audience spellbound as it artistically weaves the true story of one brave woman's escape from slavery with her seven children. 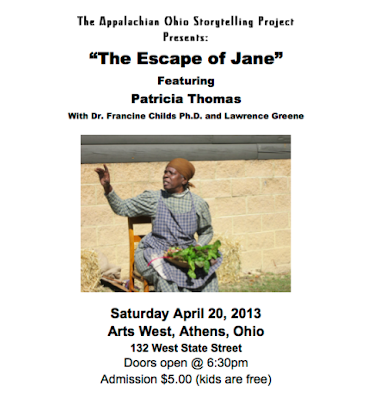 Posted by Arts West:Athens' Community Gateway to the Arts at 4/11/2013 No comments:

Jazz Spoken Here gives new and fresh interpretations to familiar and lesser known works through creative arrangements done by the performers themselves. This sextet of talented instrumentalists makes a sincere effort to appeal to a wide range of audiences. Jazz Spoken Here offers concerts and workshops in an array of settings for groups ranging from knowledgeable jazz fans to students of all ages!

“Whenever an occasion calls for extraordinary music guaranteed to wow the crowd, we turn to Jazz Spoken Here. Their spectacular performances define the word ‘cool’ and our audiences always demand more.”-  Ed Pauley, Director, Kennedy Museum of Art, Ohio University 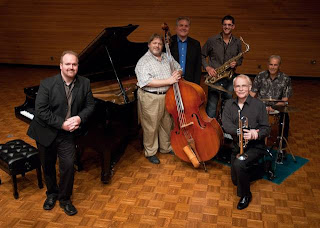 Posted by Arts West:Athens' Community Gateway to the Arts at 4/11/2013 No comments: 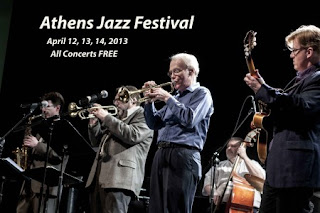 Arts/West will be hosting a performance from the Jazz Festival Friday, April 12th at 7:30pm.

A weekend of Jazz in Athens featuring guest artists Bob Thompson (piano) and Rob Parton (trumpet) as well as a number of High School Jazz groups playing on Saturday in the Baker Center Theater. The OU African Ensemble, and workshops by the visiting artists are scheduled on Saturday at the Bobcat Lounge in Baker Center.

Sponsored by the OU School of Music, ARTS/West, Stuart's Opera House, OU Performing Arts Series and the Athens Area Citizens for the Arts

All concerts and events are free!

Posted by Arts West:Athens' Community Gateway to the Arts at 4/09/2013 No comments: 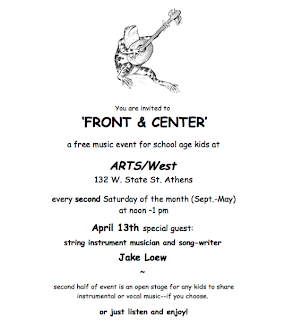 Front and Center is back! April 13th come on down to Arts/West for this free musical event that is perfect for you and the kids.
The event will take place from noon-1pm with special guest Jake Loew. Budding songwriter and talented string instrumentalist, Jake, will be taking the stage for the first half of the event. The second half of Front and Center is dedicated to any child from the audience who would like to come up and show off their musical talent!
Posted by Arts West:Athens' Community Gateway to the Arts at 4/08/2013 No comments:

The Prison Graduates at ARTS/West this Saturday!

This Saturday evening, as a part of the worldwide arts festival Nuit Blanche, ARTS/West will host a performance of the award-winning The Prison Graduates. Written by the late Ghanaian playwright Efo Kodjo Mawugbe, The Prison Graduates is a tragicomedy about social and economic inequality in neocolonial Ghana. The play tells the story of four ex-convicts just released from one of the country’s high-security prisons. In their attempts to imagine a future in an economically unstable nation, the bright and lovable losers shed light on crucial issues such as civil servant bribing, an abused and overcrowded prison system, and the dangers of impersonal cash-and-carry medical care. And while the play is certainly socially conscious, it is also immediately funny. Using a mélange of cultural humor, slapstick comedy, and satire, it promises to keep audience members rolling with laughter while posing difficult questions about freedom and self-determination.

Efo Kodjo Mawugbe was a researcher, educator, and writer who served as Regional Director of Arts and Culture and worked with Ghana’s National Commission on Culture. He has been named Director of the National Theatre in Ghana and has won awards from the BBC and the British Council International Radio Playwriting Competition. He passed away September 14, 2011.

The Prison Graduates will be directed by Michael Ofori and performed by the Ohio University Agofomma, a multicultural student organization dedicated to the performance of African and African American theater to “facilitate the proliferation of cohesion and jollification for all.” It will be held Saturday April 6 at 7:30-9:00 PM at ARTS/West. Admission is free with a suggested $10 donation, and seating is first come first serve.

You can find the rest of the Nuit Blanche schedule here.

Posted by Arts West:Athens' Community Gateway to the Arts at 4/05/2013 No comments:

The Annual all-night art festival, Nuit Blanche (White Night), is this weekend April 6-7th.
The festival takes place in cities around the world including: Paris, New York, Toronto, Montreal, Brussels, Rome, Madrid and in this coming year, Melbourne, Australia and ATHENS, OHIO!
Nuit Blanche includes the participation of private and public institutions, where the whole town itself becomes a space for music, film, dance, art and performances.

ARTS/WEST will be hosting the performance "Prison Graduates"  from 7:30-9:00pm. This original play is by Efo Kojo Mawugbe and directed by Michael Ofori.

Nuit Blanche Athens established and co-directed by Zelma Badu-Younge and Paschal Yao Younge (directors of the Annual Ohio University World Music and Dance Festival and Concert, and the AZA!! African Music and Dance Concert), in collaboration with Ohio University Schools of Dance and Music. Also, along with Azaguno, a vibrant multi-ethnic ensemble.

For more information on the festival visit http://www.ohio.edu/finearts/whats-happening/news-story.cfm?newsItem=0B29BFCF-5056-A800-485BF2CA9E19CFEA

To view the full list of events visit http://www.ohio.edu/compass/stories/12-13/4/upload/Nuit_Blanche_Events2013-2.pdf

Posted by Arts West:Athens' Community Gateway to the Arts at 4/03/2013 No comments: